This is Keith’s blog on tree guards. We hope you enjoy reading it.

I really don’t want to spread 120,000 plastic tree guards across the side of our lovely hill, the hill where I grew up and now farm, on the eastern edge of the Black Mountains. So, I’ve taken a good look at the pros, the cons and the alternatives, to try and decide rationally, which is the best approach for our plant on the Bryn Arw.

It has become the accepted norm in the UK that to plant a tree, you need to put your sapling in the ground and then wrap a plastic tree guard around it. This is simply ‘how it’s done’ now. This practice uses a huge amount of plastic; worse still, it disperses plastic extremely efficiently around the countryside. In some rural places, un-retrieved tree guards are by far the biggest source of plastic pollution. And yet the first commercial plastic tree guards only came on the market 38 years ago1. There are many perfectly healthy, lovely woodlands and trees that are quite a lot older than this, and which became established without plastic, thank you very much – which begs the question: do we really need guards?

Plastic tree guards have several uses, some of which did revolutionise tree planting when they first came out. In particular, they:

Tree guards protect saplings from browsing and nibbling by rabbits, hares, voles and deer. So, if you have populations of these animals where you are planting, it may well be worth using guards. However, between 1995-2019, the British wild rabbit population decreased by 64%2, and in 1995, the population was only a fraction of what it was in the 1950s. Few places have a rabbit problem today, so it is worth checking if you need to protect your trees against them. 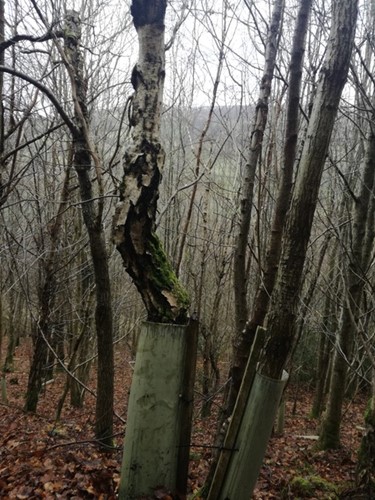 Voles are pretty ubiquitous. We have planted quite a few trees over the last 10 years without vole guards and have had no problems, although in some areas, apparently, they do cause losses. I think that if your plant site is old pasture that has not been grazed for a number of years, then you probably have lots of voles (and fat, happy owls), in which case you may want to consider protection. To be effective, a vole guard needs to be pushed into the ground and pinned there. This is time consuming, and often not done properly.

Hares love trees and I love hares, so if I was lucky enough to have loads of them, then I would use guards. Deer tree guards are enormous (1.5m tall for fallow) and expensive. If you have a lot of deer and are planting a significant number of trees, fencing is often a better, more cost effective option. Vitally, if you have deer, then you need a deer management plan, as they will decimate your tree-growing dreams!

Manufacturers claim that plastic tree guards increase survival rates by 25%, and that they saved 13 million saplings in the UK, in 2019. I don’t really know where to start with this. Firstly, if you increase survival rates by 25% and save 13 million saplings in a year, then you need to have planted a minimum of 65 million saplings in the first place. Unfortunately, we fell well short of this as a nation in 20193,5. Most of the saplings that were planted were for restocking, after clear felling; these were mainly softwoods, which are generally unguarded. I would be really interested if someone from the plastics industry could explain how they arrived at these figures.

Manufacturers, and their sales departments, make much of the amazing microclimate created inside a tree guard: they say plants photosynthesise better, manage CO2 better, and grow bigger, better and stronger as a result. Two points about this. Firstly, in my experience, ants love filling up tree guards with soil, and grass loves to grow up through them, but trees hate them. They don’t have enough room to spread their leaves and the leaves shade each other out, so they seem to bolt for freedom, for the light. Secondly, root growth is absolutely dependent on soil temperature4. This begs the question – if the guard increases tree growth by 25% (or whatever claimed), how does wrapping a piece of plastic around the stem, or indeed all, of the sapling increase soil temperature? Of course, it does not. What you get is a taller tree, which has bolted for whatever reason, with relatively poorly developed roots. In fact, the tree can only produce so much energy for growth. If this energy is being used to grow above ground, there is less energy for root growth so the roots are actually being impeded. 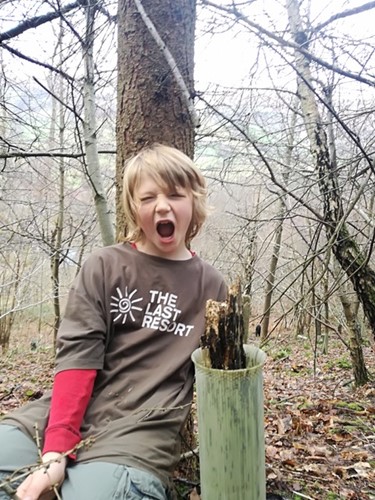 This poor root development is, ironically, compounded by the shelter provided by the guard and also the support provided by the stake. Why? Because one of the main triggers for root development is movement caused by the wind: in using guards, we are deceiving the tree into thinking it is in a more benign spot than it actually is. The resultant tree is weak-stemmed, top heavy and poorly rooted, therefore it is unbalanced. This can lead to failure.

Over millions of years, trees have evolved to race for the light created when an old tree falls, and a clearing is created in the forest. The selective pressure for fast growth at this stage is huge but growing too tall, too fast, at the expense of good roots, will lead to failure. I think trees will have worked out the optimum balance. It is pretty difficult to improve on nature.

The costs of tree guards raise some interesting questions. It costs roughly one pound to buy, plant and place a cane by a tree. It also costs roughly one pound to buy, fit and remove a tree guard. This raises the possibility of planting twice as many trees, if you are not fitting a guard, for the same amount of money. So, if you anticipate your losses to be light, you could over plant by your anticipated losses plus a bit more, and forgo using guards. This would save money, and avoid all that plastic. The trees lost to pests could be called the angel’s share!

One thing I must mention is that removal of the guards is essential, not just because they look awful and are polluting; but left on the tree, they can cause serious damage. This can happen in several ways: the guard rattles about in the wind and abrades the bark leading to a weak spot; or the tree grows around the guard, again leading to a weak spot and a channel for the ingress of water and subsequent rot. As the trees get bigger and heavier, eventually in high winds they will fail at these points of weakness.

Guards help locate trees and protect them from herbicides.

This is true. However, although it is important to be able to find the tree, a simple cane will do the job. If herbicide sprays are used, I don’t think they should be used when the tree is in leaf. You can safely spray (Glyphosate) in March, if necessary, before a sapling comes into leaf. This has equal efficacy on the surrounding herbage, but there is no risk to the tree, guarded or not.  Competition from the surrounding vegetation for moisture and nutrients is at its most detrimental to the tree in April, May and June, so you should be spraying in March anyway6.

I think the logical conclusion is that tree guards do have a place at certain sites, for example if there are heavy populations of rabbits etc. I don’t, however, think that using guards should be used by default when planting trees. They should be used sparingly, when circumstances require and proven necessary. It is always an uncomfortable feeling when your conclusions are different to perceived wisdom, but there you have it. It was a great relief to read the words of a spokesman for the public body, ‘Forestry and Land Scotland’: ‘use tree guards to aid the establishment of young trees in certain circumstances - depending on tree species and local deer, rabbit, hare or vole populations… Of the 25 million trees that we plant annually when restocking or when creating new woodlands, only 1.6% of them will require tree guards.’7

As we have few rabbits, virtually no voles (as its all bracken litter) and precious few hares on the Bryn Arw, we are not using tree guards. Instead, we are over planting by 20%, and marking the trees with bamboo canes.

To the one person who has read this far (Hi Mum), you may ask why I haven’t mentioned biodegradable or compostable tree guards in this blog? This is a can of worms entire of itself, and deserves a blog of its own. Suffice to say here, most of the guards out there claiming to be compostable are made of a material called ‘PLA’. Yes, this is a compostable material but not out in the field. Its needs to be collected, taken to an industrial composting plant (of which, I believe, there are only two in the UK), and heated to 200°C. Only then will it will ‘compost’. At Stump up for Trees, we have teamed up with Geraint Heath of Heathpac, a local packaging manufacturer to develop a truly compostable tree guard. Several hundred prototypes will be trialled on the Bryn Arw. More on this to follow.